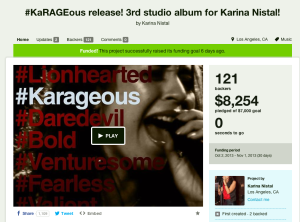 The goal was to create a Kickstarter video that didn’t feel like a Kickstarter video. The original idea was to produce 3 videos highlighting the beginning, middle and end stages of the album process/journey. We would release a video every 10 days during the 30 day campaign to keep the fundraising efforts fresh and have a legit reason to bug people over and over. “Hey, check out the new vid…and kick us down with some funds” We ended up only needing two videos, the project was funded in 13 days.

Click below for Part One of Karina Nistal’s KICKSTARTER Campaign